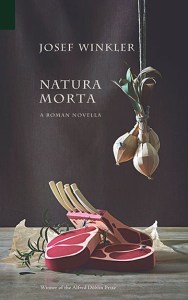 I was trying to avoid Austrian authors for this year’s German Literature Month but here I am with my second Austrian contribution already. Josef Winkler is an author I hadn’t heard of before but when I inadvertently came across his books, whilst trying to decide what to read this year, they piqued my interest, especially this one, Natura Morta: A Roman Novella. It was first published in German in 1998 as Natura morta: Eine römische Novelle. This translation was published in 2014 by Contra Mundum Press and was translated by Adrian West.

‘Natura Morta’ means ‘still life’ in Italian or ‘by death’ in Latin — or at least according to Google Translate — both phrases are relevant to this novella. There is little plot, instead Winkler uses a succession of images or descriptive vignettes of daily life set around a modern-day Roman market-place and Saint Peter’s Square. Winkler concentrates his highly cinematic eye on the mundane, such as advertisements or t-shirt messages, and the muckier aspects of life, such as filthy fingernails or offal discarded in the street. Instead of a plot we get recurring images and characters that help give the work some structure. The book is split into six parts with the first centering around a market-place. Winkler depicts the scenes in close-up, concentrating on specific details: we see gypsy girls selling underwear, people carrying meat in plastic shopping bags, butchers butchering sheeps’ heads, the dirty fingernails of fishmongers etc. Here are a couple of examples from the first part:

A black-veiled nun, holding plastic bags full of cucumbers, apricots, and onions in one hand and pressing two tall blonde Barbie dolls wrapped in plastic to her breast with the other, stopped before the tomato vendor, whose vegetable knife hung from a lanyard around his neck, laid the dolls on a wooden crate, and asked for a few kilos of tomatoes on the vine.

Another gypsy girl — two gold upper teeth shone in the void of her harelip — lifted her right breast slightly and placed her nipple in the mouth of her child, whose eyelids were sealed shut with pus.

One of the characters we are introduced to is Piccoletto, a sixteen-year-old son of a fig vendor, who works at the Damino fish-stand in the market-place. Whenever Piccoletto appears in the narrative it is mentioned that he has ‘long black eyelashes nearly grazing his cheeks’.

The second part takes place in Saint Peter’s Square. Piccoletto is sitting around watching the girls nearby whilst we, via the narrator, watch him closely, intimately, concentrating on the spittle on his lips as he drinks some water or on his testicles seen through the leg-hole of his shorts. There are people selling plastic Jesuses, tourists, children, policemen all passing in front of Winkler’s lens. Here’s a description of a man from this section.

A little humpbacked man with a waxen face, his cadaverous skin covered in black blotches, crossed himself and kissed the black fingertips of his emaciated hand, while a group of nodding bishops dressed in red, wiping the sweat from their chins with kerchiefs embroidered with yellow mitres, walked past him through Saint Peter’s Square. His eyelids and eyelashes were painted black with mascara, his eyes were yellowish and blood-spotted, his sparse hair was dyed black, his moustache flecked with gray. Wheezing, he pulled his mouth open and closed and grasped his throat with a hand covered in golden rings.

Although we have this onslaught of descriptive text, little plot developments do begin to occur, and they are sometimes a bit sinister. A ten-year-old girl had been ogling Piccoletto’s testicles earlier on this section and at the end we are told that he leaves the square accompanied by the girl; we have no idea who she is or whether they are related or know each other or where her parents are.

N.b. I reveal in this paragraph a significant detail of one of the characters. if you don’t wish to find out then you may wish to skip to the next paragraph.
The narrative returns to the market-place and the images of butchered meat, offal, gypsy-girls selling underwear, babies with pus-encrusted eyes, neo-Nazis, Moroccan rent boys, nuns with Barbie dolls, rotting fish. Unexpectedly Piccoletto gets hit by a fire-engine and dies, his distraught employer brings his body into the shop, whilst Winkler’s descriptions of the event is merged in with the continuing descriptions of other events; Piccoletto’s body is described in the same, meticulous, dispassionate manner as the meat that was being butchered and sold. The recurring description of Piccoletto’s eyelashes continues, only now they are those of a dead boy:

This short novella will not be to everyone’s taste; the squeamish may wish to avoid it, as will die-hard fans of plot-driven novels, but if you liked the quotes above and like the sound of a novella with descriptive prose and a cinematic feel then you might enjoy this book. Contra Mundum Press have also published When the Time Comes and Graveyard of Bitter Oranges, both of which sound like interesting reads.

This is my third contribution to German Literature Month VIII. 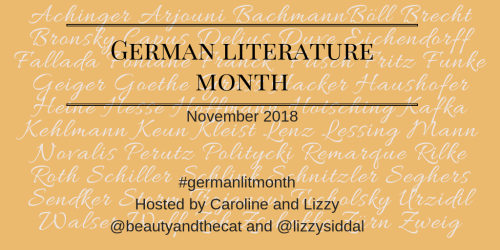 Bibliophile on a budget / in a world of mythology

The Independent Woman and the myth of the Australian bushman