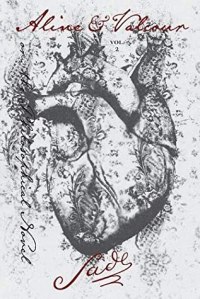 Volume One of the Contra Mundum Press edition of Sade’s 1795 novel, Aline and Valcour was covered here. That volume ended with the arrival of the mysterious young couple Sainville and Léonore; Sainville claims to be returning to his regiment in Calais but the company at Vertfeuille suspect they’re not telling the truth. Volume Two consists of a single letter from Déterville to Valcour recounting Sainville’s story—that’s a 216 page letter! I also like Sade’s footnote for this letter which reads: Any reader who would take what follows as a pointless episode, to be read or passed over at will, would be making a grievous error. Just in case we were thinking of skipping this volume.

So, Sainville tells his story which begins three years before: he and Léonore are a young couple in love, and, as with Aline and Valcour, their parents are opposed to their union. Léonore’s family has arranged for her to marry Count de Folange but as she refuses to marry him she is sent to a convent. Similarly, Sainville refuses his arranged marriage—it’s worth noting here that Sade’s marriage was arranged for him, against his will, between his father and his future mother-in-law, Madame de Montreuil. With the help of an aunt Sainville manages to get into the convent, dressed as a woman, and hatch an escape plan with Léonore which involves Léonore posing as a statue of a saint. 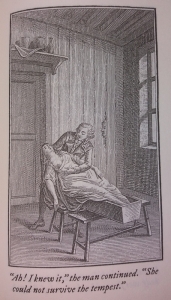 This is quite an amusing episode in the novel and shows that Sade can be quite frivolous at times. The couple marry themselves in the eyes of God and head for Venice where they spend an idyllic few months before disaster strikes. One day when Sainville goes sight-seeing on his own Léonore is abducted by several men in gondolas. Sainville is prevented from searching for her straight away as he is arrested, but following his release he begins his search for his lover. Sade creates another bizarre scene where Sainville, who is staying in a hotel room before embarking on his journey, observes through a hole in a wall a man open a coffin, which contains a young woman; the man is pleased to find that she is still alive. Sainville can’t watch any more as he has to leave to board a ship, but little does he know that the woman in the coffin is Léonore.

Believing that Léonore is on a ship bound for the Cape, Sainville pursues her, ends up lost in Africa and is captured by a tribe of Butuans, a savage race of cannibals, who are ruled over by a tyrant, King Ben Mâacoro.

On the altar steps before my eyes was the most horrible scene. The King had just committed a human sacrifice; this palace was also his temple. His just-murdered victims were still palpitating at the feet of the idol. Lacerations covered the wretched victims and blood flowed everywhere, with heads separated from bodies—all of it combined to chill my senses. I flinched from horror.

Sainville manages to survive only because King Mâacoro believes he can be of use to him. So, Butua is a dystopia, ruled over by the tyrant king; all his subjects are of little worth to the king, especially women who are treated like cattle or slaves. Sainville learns about Butuan life from a cynical Portuguese man, Sarmiento, who has managed to survive there for several years. Butua is in decline, its population is decreasing, it is constantly at war with neighbouring states, and its industry is negligible. In this section Sade is able to voice his opinions, through Sarmiento, of his ideas of moral relativity, and the benefits of sodomy. It’s strange how Sade often uses the most odious characters to put forward what are presumably his own views, and to mix them up with other views that he, presumably, didn’t hold.

Sainville eventually escapes from the Butuans and then travels to the South Pacific where he comes across the utopian land of Tamoé, ruled by the philosopher-king, Zamé. Zamé explains to Sainville how Tamoé is organised; in contrast to Butua, Zamé considers himself a First Citizen rather than a king. Property is held collectively, people are free to marry whoever they like and divorce is legal. There are few laws and no prisons as punishing people is anathema to the Tamoéans; shame and exile are their most severe judgements.

For any citizen who does wrong you must have but one objective. If you wish to be fair, let his punishment be useful to him and others; anything that deviates from that aim is infamy.

For the reader dystopias are usually more interesting than utopias, although we’d probably rather live in the utopia, even if it is more dull. But as I was reading this section I couldn’t help but wonder how Sade would cope in this utopia he’d created; I’m sure he would have found it all incredibly dull. We have to remember that he wrote Aline and Valcour whilst in the Bastille, he finished it around 1788 but didn’t get it published until 1795, after he’d been released from prison again, following his arrest under the revolutionary government. Sade mentions several times in the footnotes, which were presumably added after the revolution, that he’d written it before the revolution whilst he was imprisoned by the ancien régime. The reader in 1795 is presumably supposed to think of Butua as the ancien régime and Zamé as the ideal revolutionary state, yet to be achieved.

On leaving Tamoé Sainville’s adventures continue as he manages to escape the Spanish Inquisition; he finally finds Léonore, who is working as an actress in Bordeaux. We are told at the beginning that they were re-acquainted three weeks earlier.

It’s now time for Léonore’s story but Déterville reveals that there are policemen banging on the doors so we’ll have to wait until volume three.