‘The Tenant’ by Roland Topor 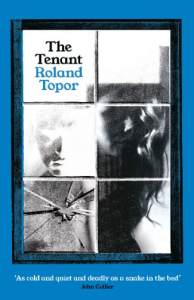 The Tenant, by Roland Topor, was originally published in 1964 as Le Locataire chimérique. It was made into a film by Roman Polanksi in 1976, and for many of us, at least in the English-speaking part of the world, this is our introduction to Topor’s work. I only watched the film about ten years ago and thought it was excellent, as most of Polanski’s films are, and similar in theme to his 1965 film Repulsion. When I discovered that it was based on a novel I sought out more information on the author and the novel but in typical fashion I never got round to reading it. When Valancourt Books published a new edition at the end of last year I decided the time had come to read it. However, even that was difficult as getting a copy here in the UK was a bit of a struggle. This Valancourt Books edition was published in 2020 and originally translated by Francis K. Price in 1966.

The Tenant begins with Trelkovsky looking for a new flat in Paris, having been told to leave his old flat—no reason for this is given but right from the start Trelkovsky is described as an ‘honest, polite young man in his early thirties’ who holds a steady office job so we don’t expect any foul play. The apartment consists of two gloomy rooms with peeling wallpaper but as apartments in Paris are scarce and he needs one soon he can’t afford to be too choosy. He’s not even fazed when the concierge gleefully informs him that the previous tenant, a young woman called Mlle Simone Choule, threw herself out of the window; she’s not dead but she’s in hospital and in a bad way. Trelkovsky can’t be choosy and he needs an apartment so he goes to see the owner, M. Zy, who lives in the building on a lower floor. Trelkovsky manages to haggle with Zy but he’s warned that they don’t like noise in the building, so no parties, children or animals are allowed.

Leaving the building, pleased that he’s got the apartment but worried about his position if the former tenant returns, he decides to visit Mlle Choule in hospital. One of Simone’s friends, Stella, is also visiting when Trelkovsky arrives. Simone’s face is heavily bandaged but Trelkovsky notices a missing incisor tooth. Simone has only recently come out of a coma and stares into space but when her attention is drawn to Trelkovsky and Stella she lets out a moan which builds to a scream. Time to leave. Trelkovsky and Stella go for a coffee and then to the cinema. Simone dies later that evening. Trelkovsky is ready to move out of his old apartment.

Already at this point in the novel Trelkovsky comes across as a loner, who has an active imagination and is rather finicky and straight-laced, perhaps neurotic. Throughout the novel Topor mentions times when Trelkovsky needs to urinate, fart and vomit. At one point, when walking back to his old apartment just prior to moving he’s ‘playing a game’ whereby he farts with every step only to be embarrassed when an old man frowns at him. Later on in the novel, at Stella’s flat, he has a vomiting fit—he feels disgusted with himself but at the same time he feels free.

When packing for his move to his new flat he experiences a sense of loss that he has to move from his flat, he feels that a part of his own self is contained within the walls.

He had lived so many years in this room that he still could not quite grasp the idea that now it was finished. He would never again see this place which had been the very center of his life. Others would come into it, destroy the order of things that existed now, transform these four walls into something he would not even recognize, and kill off forever any lingering assumption that a certain Monsieur Trelkovsky had lived here before. Unceremoniously, from one day to the next, he would have vanished.

So Trelkovsky moves in and before long he’s having trouble with the neighbours. When he has a house-warming party a neighbour complains of the noise, when he tries to move furniture about they bang on the floor, when he has the radio on low they bang on the walls. Trelkovsky, being timid, is worried about how he appears to his neighbours much to the amusement of his friends who think he should tell them to go to hell and mind their own business. In an amusing episode where Trelkovsky is taking out his rubbish to the communal bins he ends up spilling bits of rubbish on the stairs and when he empties out his rubbish he’s aware that his rubbish is not as ‘neat’ as the other tenants’ rubbish. He even feels ashamed about his rubbish.

When he lifted the cover of one of the trash cans, before emptying the contents of his own pail into it, he was always astonished by its neatness and order. His own trash was the most indecent collection in the entire building. Repugnant and despicable. There was no resemblance between it and the honest, day-to-day trash of the other tenants. That had a solid, respectable appearance, and his did not.

And so things start to get a little strange: people knock on his door but disappear before he can answer it, the rubbish he drops on the stairs is cleared away before he returns; he finds a canine tooth wrapped in cotton wool in a hole in the wall and just why do the people spend hours in the toilet staring at the wall—the toilet window is opposite Trelkovsky’s apartment window.

As the novel progresses Trelkovsky’s sense of paranoia grows and he feels his own identity fragmenting. He imagines that the other tenants drove Simone Choule to jump from her window and soon believes that they are trying to turn him into Simone. When he has a fever the lines between reality and paranoid fantasy become even more blurred, especially when he sees a bandaged Simone Choule through the toilet window. Later, when he is walking through the streets his fellow Parisians appear as if in a dream.

He strolled through the streets unhurriedly, observing the passing crowds. The ranks of faces filed steadily, almost rhythmically, before him, as if their owners were standing on some kind of endless, moving sidewalk. Faces with the great bulging eyes of toads; pinched and wary faces of disillusioned men; round, soft faces of abnormal children; bull necks, fishlike noses, ferret teeth. Half closing his eyes, he imagined that they were really all one face, shifting and changing like the patterns of a kaleidoscope.

As the novel progresses there’s an inevitability about the ending but Topor still has a couple of surprises up his sleeve. Topor’s brilliant novel is both creepy and amusing; it’s scary being in Trelkovsky’s head, we know he must be going mad but anyone who has lived in an apartment block will recognise some of the petty rules and the squabbles that can erupt into more.

It’s easy to see why the novel appealed to Polanksi and, having watched the film again after reading the novel, I think he did a brilliant job of putting it on the big screen—it sticks very closely to the events in the novel. Polanksi himself plays Trelkovsky and is suitably meek, nervous and tormented throughout the film. The film is visually very dark, it’s either mostly at night or in Trelkovsky’s dark, dingy flat. So, I would suggest you watch the film AND read the book; it’s up to you which one you do first.

See below for a slideshow of images from the film. n.b. this may not be viewable on all devices.