It did not take Lil-Umbra long with her fifteen-year-old legs and her slender figure to scamper down the quarter-of-a-mile avenue of over-arching elms that led due eastward from the Fortress of Roque, where she lived, to the ancient circle of Druidic stones that had come to be known as “Castrum Sanctum”. 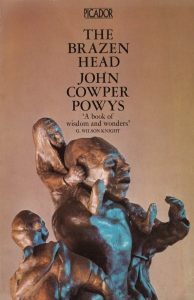 So begins, John Cowper Powys’s novel, The Brazen Head, published in 1956 when he was 83 years old. The events in The Brazen Head take place in the year 1272; the title refers to a talking ‘brazen head’ that was invented by Friar Roger Bacon and which could supposedly answer any question put to it. The opening lines introduce us to Lil-Umbra, the daughter of Sir Mort, the Baron of Roque Castle, as she meets Peleg, a Tartar giant who is indebted to Sir Mort with saving his life during a crusade. Powys’s novels typically have a multitude of characters and The Brazen Head is no different; briefly the novel covers the inhabitants of three castles and a priory along with various visitors. Firstly there is the Manor of Roque, owned by Sir Mort, his wife, Lady Val and their children, Lil-Umbra, Tilton and John; John is about twenty-years old and studies under Roger Bacon. Secondly, there is the Castle of Lost Towers, occupied by Sir Maldung, his wife, Lady Lilt, and their beautiful daughter Lilith; both Sir Maldung and Lady Lilt appear mad and Lilith wicked. Thirdly there is Cone Castle, occupied by Baron Boncor, his wife, Lady Ulanda and their son Sir William; Raymond de Laon, who is a relative of the Baron’s is currently visiting. Fourthly, there is the Bumset Priory, run by Prior Bog, and is the current home/prison of Friar Roger Bacon.

Just in case the reader is thinking that this will be a rather tiresome historical novel we are quickly introduced to a horse, called Cheiron, that has an incipient human head forming in its neck, an old man who has discovered the consciousness of inanimate objects, and later on in the novel we are introduced to Peter Peregrinus of Picardy who carries a lodestone around with him and wants to use it to take over the world but also just seems to enjoy giving people, including Bacon, ‘magnetic shocks’ just for the hell of it—he also fantasises about getting his revenge on the human race. Lilith of Lost Towers is an odd one too, and feared by Lil-Umbra, who seems to sense Lilith’s malevolence. Lilith, though possibly evil, is extremely beautiful and inspires lust in just about every man she meets; she acts lasciviously towards Bonaventura, for example, a friar who is searching the land for heretics, and has his eyes on Bacon. Lil-Umbra fears that Lilith will try to seduce Raymond de Laon, whom Lil-Umbra is in love with. Lilith and Peregrinus seemed to be made for each other and they become a sort of Brady-Hindley couple. If Lilith is a bit cracked, then it’s no surprise because her parents are just as mad; her father, Sir Maldung, is very odd, and tries to kill both Sir Mort and Baron Boncor by arrow. Here is a description of Sir Maldung, as he interrupts a meeting between Baron Boncor and Bonaventura in the woods; this precedes Sir Maldung’s attack on Baron Boncor.

He was interrupted by the appearance of the most amazing human figure that any of them, man or beast, had ever seen in his life before. This personage came dancing into their midst, and not one of them could take his eyes off him for a second when once he appeared. He inhaled and sucked in and tried to drain up the essence of every living soul upon that spot, whether such a soul belonged to a man or an animal or a bird or a reptile or a toad or a worm or an insect. None of the three human beings present at that cross-tack in the forest had a flicker of doubt as to who this intruder was, who thus came dancing into the midst of them.
It was Baron Maldung himself, the Lord of Lost Towers!

And what of Bacon’s brazen head? Well, it undergoes an….invocation…I guess, as that’s the title of the chapter; this invocation involves inviting Ghosta, a Jewish servant girl who has just arrived in the priory, and who has had a presentiment to visit the friar, to straddle the brazen head with her naked genitals touching the neck, whilst they all repeat the following: Birginis, Sirginis, Flirginis, Virginis. Apparently this is of use to Bacon. This scene is portrayed on the cover of my edition by a sculpture by Patricia V. Dawson, a series of seven sculptures based on events in the novel. Bonaventura, meanwhile, considers Bacon an heretic; he intends to put a stop to his experiments and seize and destroy the brazen head; and maybe even Bacon as well.

This is certainly a wild novel, full of grotesque characters and it is amazing that a man in his eighties would write such a thing. Some of Powys’s other later novels sound even stranger than this one. Maybe it isn’t quite as consitantly crazy as I’ve made it out to be but it’s not far off and the ending is suitably chaotic and cataclysmic—you will have to read it though to find out what happens. In amongst all the weird characters and the strange goings-on there are some beautiful passages; Powys’s skills as a writer certainly didn’t deteriorate as he aged. Here’s a short passage near the end of the book as an example of the calmer prose in the book.

It may well be that what gives to the wind along that Wessex coast its indescribable mixture of vague sorrow and wild obscure joy comes from its passing, on its unpredictable path, the floating hair of so many love-lorn maidens and the wild-tossed beards of so many desolate old men.

The Brazen Head was read as part of Karen’s and Simon’s 1956 Year Book Event. 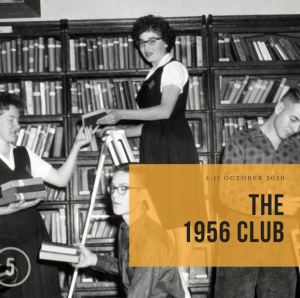 For the 1956 Club I thought I’d carry on the Powys and Miller theme I started earlier this year. I’ve had to cheat a little with my choice of Miller’s works: although A Devil in Paradise was printed separately in 1956, it was subsequently included in Miller’s larger work of 1957, Big Sur and the Oranges of Hieronymus Bosch, where it was re-titled Paradise Lost. ‘Big Sur’ is more readily available than the separate edition and it’s what I had to hand.

A Devil in Paradise is a short work, of just over a hundred pages, and the ‘devil’ in question is Conrad Moricand, born in Paris 1887. Is he a devil? Well, not really, just an annoying house-guest who becomes a leech on Miller and family, though he does divulge some unsavoury aspects of himself. Miller was first introduced to Moricand by Anaïs Nin in Paris in 1936 and his first impressions weren’t favourable. They have very little in common: Moricand was an astrologer, prissy, ascetic, whereas Miller was outspoken, gregarious and enthusiastic. Anaïs Nin had hoped to offload some of the responsibility she had for caring for Moricand onto Miller—why Nin was responsible for him in the first place is not explained. Anyway, Miller did his best to feed him and find him work. As poor as he was, Moricand had to keep up a front of respectability and affluence, much to Miller’s amusement.

What sticks in my crop about this period, when he was so desperately poor and miserable, is the air of elegance and fastidiousness which clung to him. He always seemed more like a stockbroker weathering a bad period than a man utterly without resources. The clothes he wore, all of excellent cut as well as of the best material, would obviously last another ten years, considering the care and attention he gave them. Even had they been patched, he would still have looked the well-dressed gentleman. Unlike myself, it never occurred to him to pawn or sell his clothes in order to eat. He had need of his good clothes.

Miller left Paris for Greece in June 1939 and does not hear about Moricand again until 1947 when he receives a thick, forwarded, letter from him. Moricand is living in Switzerland, and as always, is in a precarious state. Miller gets the idea to invite him over, though he’s not sure how his wife will take to it. She can see it ending badly.

Henry gets his way and he manages to raise the passage money somehow and it’s not long before Moricand has arrived in Big Sur, California. Moricand seems to be impressed at first, calling the place ‘paradise’, but a small incident, where Moricand insists that he can only use Yardley talcum powder, makes Miller realise early on that his wife had been correct—that it was a mistake to invite him to their home.

But of that instant I knew my wife was right, knew that I had made a grave mistake. In that moment I sensed the leech that Anaïs had tried to get rid of. I saw the spoiled child, the man who had never done an honest stroke of work in his life, the destitute individual who was too proud to beg openly but was not above milking a friend dry. I knew it all, felt it all, and already foresaw the end.

If it’s not the talc, then it’s the correct size paper, French cigarettes, proper eau de cologne, and then he needs codeine. Miller ends up portraying Moricand as a malingerer, sponger, drug-addict and finally a paedophile—this last one supposedly by his own admission, from a tale he tells the Millers.

So, this is an amusing and interesting character study/demolition, one we can probably all relate to, i.e. the annoying guest who just won’t leave. But it does make one wonder how much is true. I read a couple of Miller biographies decades ago but can’t remember if they say anything about Moricand. Whilst writing this review I came across a book by Karl Orend, called The Brotherhood of Fools & Simpletons: Gods and Devils in Henry Miller’s Utopia (Alyscamps Press, 2005) which appears to show Moricand’s side of the story — if anyone’s interested here’s a review of the book.

This was read as part of Simon’s and Karen’s ‘1956 Club’ Reading Group.

Other formats are available