I have started reading the second volume of Maupassant’s stories that I bought over a year ago, titled 88 More Stories, which was published by Cassell & Co. Ltd in 1950 with translations by Ernest Boyd and Storm Jameson. One story contained in this volume, called A Family, 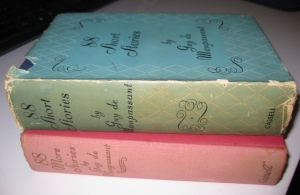 is a short piece where the narrator visits a friend he hasn’t seen since the friend married, fifteen years before. He barely recognises the friend, who is now quite fat, and the description of the friend’s wife is brilliantly dismissive and also a bit nasty; I won’t include it here but she is called, amongst other things, ‘a procreating machine made of flesh’, due no doubt to her five children. The husband is also dismissed in a similar fashion as ‘a reproductive animal who spent his nights generating children between a sleep and a sleep, in his provincial house, like a rabbit in a hutch.’

Dinner was begun.
“Look,” murmured Simon. Grandpapa did not like the soup, and refused to eat it. He was forced to do so, for the sake of his health; the servant forcibly thrust a spoonful into his mouth, while he blew violently to keep from swallowing the broth; it spurted out like a fountain, all over the table and over those sitting nearest him.
The children shrieked with laughter, while their father, highly pleased, repeated: “Funny old man, isn’t he?”
Throughout the meal he monopolised the attention of the whole family. His eyes devoured the dishes on the table, and his frantically trembling hands tried to snatch them and pull them to him. Sometimes they were placed almost in his reach, so that the company might see his desperate efforts, his palsied clutches, the heart-broken appeal manifested in his whole body, his eyes, his mouth, his nose, which sniffed them. His mouth watered so that he dribbled all over his napkin, uttering inarticulate whines. And the entire family was de­lighted by this odious and grotesque torture.
Then a very small piece would be put on his plate, and he would eat it with feverish voracity, so that he might have some­thing else the sooner.
When the sweet rice came, he almost had a fit. He moaned with longing.
“You have eaten too much; you shan’t have any,” shouted Gontran, and they made as though he were not to be given any.
Then he began to cry. And as he wept he trembled still more violently, while all the children roared with laughter.
At last his portion, a very small one, was given him; and, as he ate the first mouthful of the sweet, he made a comically gluttonous noise in his throat, and a movement of the neck like that of a duck swallowing too large a morsel of food.
When he had finished, he began to stamp his feet for more.
Seized with pity at the heart-rending spectacle of the tortures inflicted on this ridiculous Tantalus, I implored my friend on his behalf:
“Do give him a little more rice.”
“Oh! no, my dear chap,” replied Simon; “if he ate too much at his age, it might be bad for him.”
I was silent, musing on this speech. O Morality, O Logic, O Wisdom! At his age! So, they deprived him of the only pleasure he could still enjoy, out of care for his health! His health! What was that inert and palsied wreck to do with his health if he had it? Were they husbanding his days? His days? How many: ten, twenty, fifty, or a hundred? And why? For his own sake? Or was it in order to preserve to the family the spectacle of his impotent greed?
He had nothing to do in this life, nothing. Only one desire, one pleasure, remained to him; why not give him full measure of that last pleasure, give it him until he died of it?
At last, after a long game of cards, I went up to my room to bed; I was sad, very, very sad.

I think the narrator’s thoughts on the family’s cruel treatment of the old man reflects our own feelings on the subject but the family seem oblivious of their cruelty. Haven’t we all found ourselves in a similar situation, maybe not so extreme, where we witness something like this but are unsure whether to intervene? This is a brilliant story by Maupassant; one of his stories that is just a short episode, a snapshot of contemporary life that he did so well.

This post is cross-posted on the Marvellous Maupassant blog.

16 responses to “Extraordinary Excerpts: ‘A Family’”