Aquis Submersus is a novella that is included in the New York Review of Books collection called The Rider on the White Horse translated by James Wright. I’m a new convert to Theodor Storm’s work and although this collection is all that I’ve read so far I will certainly be reading some of the other collections that have been translated by Denis Jackson and published by Angel Books. It’s probably fair to say that I generally prefer short stories and novellas to long novels. I find that a short story stands more chance of reaching perfection than a novel does and Aquis Submersus is such a story, so close to perfection.

The story was written in 1875/6 and begins with a contemporary narrator recalling his childhood friend, the pastor’s son, together with descriptions of the surrounding countryside. On the very first page of the story we get this description:

Here the honeybees and white-gray bumblebees hummed over the fragrant blossoms of heather, and the beautiful gold-green beetles ran among the plants; here in the sweet clouds of the erica and the resinous bushes hovered butterflies that could be found nowhere else on this earth.

But it’s not nature that particularly piques the narrator’s interest, instead it is a picture of a dead five year old boy holding a water lily that hangs inside the church. Next to this there is a portrait of the boy’s father, a severe looking pastor. The 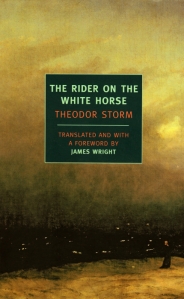 picture of the boy is dated 1666 and all that is known is that the boy drowned in a pond on the premises of the church. The narrator notices that the letters C.P.A.S. appear at the bottom of the painting. The pastor explains that ‘A.S.’ must stand for ‘Aquis Submersus’ or ‘drowned’ but is unsure what ‘C.P.’ stands for. After a while the narrator suggests ‘Culpa Patris’ or ‘Because of the father’s guilt’. The pastor dismisses this suggestion vehemently. Years later, whilst looking for a room to rent, the narrator notices a portrait of a man holding a dead boy with a water lily in his hand. When he asks the landlord about the painting it is revealed that there are some old papers including two notebooks. The narrator is intrigued and these notebooks contain the story of Johannes, a painter, that begins in 1661.

Johannes is studying to be a painter and since the death of his father has been lucky enough to have Herr Gerhardus, an old aristocratic friend of his father, as a patron. Life with Gerhardus had been idyllic, he had often spent days playing with Gerhardus’s beautiful daughter Katherina and chatting with the friendly caretaker Dietrich. However Johannes is disliked by Katherina’s brother Wulf and it is apparent that a local young aristocrat, Kurt von der Rusch, has eyes for Katherina. When Johannes leaves for Amsterdam to continue his studies Katherina comes out to see him on his way and to give him a gift.

But on his return five years later the situation has changed. Gerhardus has recently died and now his son, Wulf, is the new master. Kurt has a vicious streak and is pursuing Katherina’s hand in marriage. The atmosphere is now one of violence and oppression. Katherina is happy to have Johannes present as a kindred spirit. They get to spend some time together when Johannes is asked to paint Katherina’s portrait and Johannes soon agrees to help deliver messages between Katherina and her aunt in order to escape from Kurt and Wulf. Johannes returns late one evening with a reply from Katherina’s aunt. It is too late to enter the estate so he goes to an inn only to find that Wulf and Kurt are there. Wulf guesses that Johannes is carrying messages for Katherina, tussles with him and then sets his dogs on him. Johannes manages to escape and finds himself up a tree outside Katherina’s window. She lets him in and they spend the night together. With their love for one another now certain they plan to elope the following day, but when Katherina doesn’t appear Johannes confronts Wulf and asks for her hand in marriage. Wulf shoots Johannes but does not kill him. After recuperating Johannes escapes to Amsterdam and has a relapse. He is unable to contact Katherina and no-one has seen her since that day. The first notebook ends.

There is much symbolism and foreshadowing in the first notebook. When, as children, Katherina wants to show Johannes some birds that have nested in the hollow of a tree, she is shocked to find an owl standing guard over the opening waiting for the birds to exit. She cries ‘the goblin!’ and urges Johannes to shoot the owl, which he does. Later on Katherina would shout ‘the goblin!’ whenever Kurt would appear and they would both run away. Wulf later became a more sinister manifestation of the goblin, preventing Katherina from escaping. After Johannes had escaped to Amsterdam following the shooting he still had hopes of returning to Katherina; but he was unaware of those intent on thwarting his ambitions:

…and soon I could see the day of my journey to Katherina moving happily toward me, nearer and nearer and nearer—totally unaware of the evil obstacles that I would have to struggle against, before I came to the end.
But a man’s eyes cannot see the darkness that lies right in front of him.

When Johannes is looking at the older portraits in Gerhardus’s home and he comes across a painting of a woman displaying Wulf’s harshness it is revealed that she cursed her own daughter for not marrying the man she wished her to. The daughter was found the following day drowned in the pond.

I will reveal the ending in what follows so if you wish to remain ignorant of the ending it may be best to stop reading any further.

The second notebook resumes the story five years later in 1666. Johannes is living with his brother and he has a steady income from his painting. One day he receives a commission to paint a portrait of a pastor; it’s not well paid but he’s between jobs and he decides to use it as an excuse to spend some time in the country. When he arrives he sees the pastor leading ‘a ‘beautiful, pale little boy of four’ by the hand. The boy is often present when the pastor sits for the painting and Johannes is surprised to discover that the boy is also called Johannes. He only catches brief glimpses of the boy’s mother. Later at home it dawns on him:

The eyes! The eyes of that beautiful, pale little boy! They were her eyes! What had I been thinking of? But then, if it were she, if I had already seen her again—I shuddered at my thoughts

Whilst the others are away in town he manages to talk to the boy’s mother, who is indeed Katherina. She reveals that the boy is Johannes’ son and that the pastor had been kind enough to take her as his wife despite her being a ‘fallen woman’. When the pastor and the sexton return Johannes leaves Katherina to speak to them, but they are interrupted by a cry—little Johannes has drowned in the pond.

The ending of the story is very powerful and controlled. The pastor discovers the truth about Johannes and Katherina and he orders Johannes to paint a portrait of the dead child. Left alone, for the first time, with his son, Johannes holds him. Johannes explains that C.P.A.S. stands for ‘Drowned in the flood of his father’s guilt’.

I felt it necessary to include much of the plot details in this post because the basic plot could so easily point towards a melodrama. Indeed, I could imagine other nineteenth-century authors really going to town with such a story and creating some hideously mawkish story. But it’s Storm’s incredibly controlled, but poetic, style that really brings the story alive. The story is told in a clear, realistic way. For example, the scene where Johannes and Katherina spend the night together following Johannes’ escape from Wulf’s dogs is so naturally depicted that it’s entirely believable. Due to Johannes’ lowly status, their intended marriage will never be accepted by others and so they plan their escape the following day; Johannes asks:

“Should I leave you now, Katherina?” I said at last. But the young arms raised me up to her mouth without a word, and I did not leave.

We had created the life that came to this death;

Is it guilt over creating a life that had to die young?