‘The Lost Reflection’ by E.T.A. Hoffmann

The Lost Reflection is a story from the 1932 collection of tales ‘Tales of Hoffmann’ published in 1932 by Dodd, Mead & Co. I started posting reviews of the stories from this collection earlier this year, which was really an excuse to show the lovely illustrations by Mario Laboccetta. I have already posted reviews on The Entail and The Sandman. I thought I’d use GLM V as an excuse to post some reviews and images of the other stories in the collection.

So, the story begins on New Year’s Eve and it’s worth quoting the opening sentence:

I was delirious with fever: the cold of death pierced my very heart, and heedless of the fury of the storm I ran through the streets hatless and cloakless like one escaped from a madhouse. 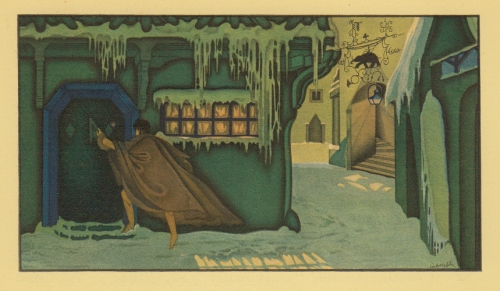 The narrator recounts how he came to be running throught the streets like a madman. He’d attended a ball hosted by the counsellor of justice where he met Julia, a woman he’d previously been in love with. He acts like an ass, bumps into people and when he finally gets to talk to her he faints. When he awakes he discovers that Julia is married. This totally freaks him out and he rushes through the streets until he reaches a tavern. He settles down and orders some beer and tobacco. Before long a tall, thin man comes in, keeping his back to the wall, and sits down at the narrator’s table. Then a short man enters the tavern and he asks the landlord to cover the mirror. The two men know each other and argue about obscure topics. By the time the tall man leaves, the narrator realises he is Peter Schlemihl, the man who sold his shadow to the devil.

The narrator seeks out a room for the night at another tavern. In the room there is a large mirror and when he looks into it he sees Julia’s image and cries out ‘Julia!’.

He realises that there is another person in the room and is surprised that it’s the short man from the other tavern. He’s having a bad dream and is calling out ‘Giulietta!’. The narrator wakes him and the man asks him to cover the mirror. The narrator is curious about the man and it turns out that he has no reflection, but rather than selling it like Schlemihl, he gave it away for love. He promises to tell the narrator his story but they are both too tired. The narrator has vivid dreams and in the morning he finds the man has gone. He has, however, left some written pages. The man was called Erasmus Spicker and we now switch to his story.

Erasmus had decided to leave his family to go travelling and so he heads for Italy. In Florence he makes friends and frequents parties. His friends all take mistresses but Erasmus loves his wife and wishes to remain faithful. The others mock him and they decide to test him by calling in Giulietta.

Erasmus is intoxicated with desire and declares his undying love for her to the astonishment of his friends. Upon returning home he encounters a strange man called Signor Dapertutto who mocks him. His friends think he’s making a fool of himself and decide that he should return home before he does something foolish but Dapertutto convinces him to meet with Giulietta before he leaves. He decides to stay. Erasmus ends up getting in a fight with an ugly Italian over Giulietta and inadvertently kills him. Somehow he escapes with Giulietta. In her boudoir she says he must leave or he will be arrested, but he must leave his reflection with her as a sign of his love for her. Although confused by this request, he agrees, and his image is detached from himself and he sees Giulietta disappear into the mirror with his image.

Erasmus leaves but soon finds that it’s difficult moving about as he is mobbed whenever it’s discovered that he has no reflection. He finally gets home to his loving wife and child and hopes to forget about what has happened. However, one day his missing reflection is noticed and both his wife and child are

horrified. He flees from his house in a distraught state and Dapertutto appears before him. He says that Giulietta still loves him and will be happy to give his reflection back if only he will poison his wife and child. Giulietta also appears to him later in a vision in an embrace with his image. She says if he can’t poison his wife then he should sign a contract in blood allowing Dapertutto to do it. He nearly signs but is prevented by the ghost of his mother. Giulietta and Dapertutto disappear but his reflection is still missing. His wife says that he can only return to her when he has found it. He now searches the world for his reflection along with Schlemihl who is looking for his shadow.

This probably isn’t the best Hoffmann story as it’s all just a bit too manic and contrived, even for Hoffmann, but that may have something to do with the translation. I’m not sure who the translator is but I’d love to compare it with a new translation. The translations of two of the other stories in this collection, ‘The Entail’ and ‘The Sandman’, seem to have parts missing from the stories so I wonder if something similar has been done with this story. Still, if read in the right mood it is quite a fun tale and has all the obsessions of Hoffmann: stories-within-stories, identity problems, magic, madness, coincidences, obsessive love etc. You can’t really go wrong with that combination, can you?

14 responses to “‘The Lost Reflection’ by E.T.A. Hoffmann”

Literary Recon into the Wilderness of Books